First, Beyoncé Knowles and Jay-Z had their first child, renting out the entire fourth floor of NYC's Lennox Hill hospital so that B could have her natural birth in peace. Their child, a baby girl named Blue Ivy Carter (B.I.C.), has already released Glory, her first single.

I wish them all the best. But more about that later.

Second, facebook temporarily deactivated one of my favourite posters. January Harshe, who writes the birth blog Birth Without Fear, posted a picture. It offended someone. And although there was no nudity or violence in it, BWF was told this was her final warning—and they would shut down her facebook page (which has over 16,000 likes!) if she wasn't more careful. The offending pic?

I don't see anything about life-giving organs in there. Do you? Perhaps this placenta is hateful; certainly, some find it threatening. More threatening than... 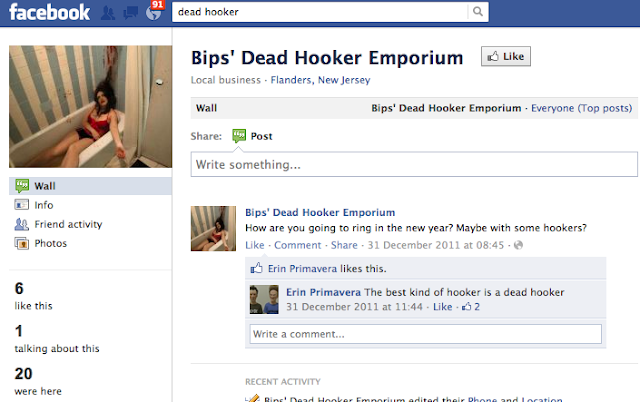 Or this, an actual image of serious violence. 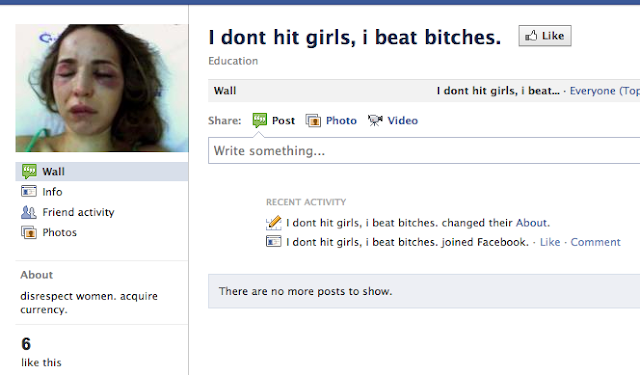 Those three images are just a sampling of the ugliness that gets published on Facebook. Lots of women were upset about the BWF placenta censorship (placensorship?), since, as they said, "all kinds of gross pictures of naked women are allowed!" Indecent pictures of naked women don't bother me as much as the dead hooker joke groups. Or the 'beating women is cool' groups. Or the 'rape is funny groups', a petition against which garnered several thousand signatures last September, but made little traction since, as the FB moderators said, it's not hate speech, it's opinion.

Rape isn't exactly something you can have an opinion about. It's not like heavy metal, plastic bags or anchovies. It's not controversial.

Facebook has its roots deeply planted in the misogyny of our culture. Let's not forget how it started: a site for guys to check out and comment on the 'hotness' of their female classmates, comparing their ID photos (illegally acquired by hacking into Harvard's student record system) with farm animals, and each other. It accepts ad revenue from sleazy companies, prompting one user, David Roberts, to create a group, 'Stop Offensive Ads on Facebook'. He says,

These ads are disgusting, promote casual and irresponsible sexual relations, and give a very wrong image about women.These ads appear frequently, and due to their sexual nature could cause possible sexual harassment issues to someone who accesses Facebook at work or in a public place. If you are female and haven't seen these ads, it's probably because they are exclusively targeted at male users.

And of course, ol' FB never wanted to allow pictures of breastfeeding—and is still occasionally taking them down, as they did with this BC mother just last month.

But Facebook is a private company and Facebook can do whatever Facebook feels like. The problem is that it has come to feel like public space, our version of the Greek agora. So what's a placenta-lovin' mama to do? Mrs. BWF has decided to move her entire community to a private forum attached to her blog. Understandably, she doesn't want to run the risk of having her account deleted for bad behaviour.

But what about the rest of us? I signed a petition to stop placensorship on facebook, but I doubt that'll do anything. I also made this censored picture of my placenta my profile pic: 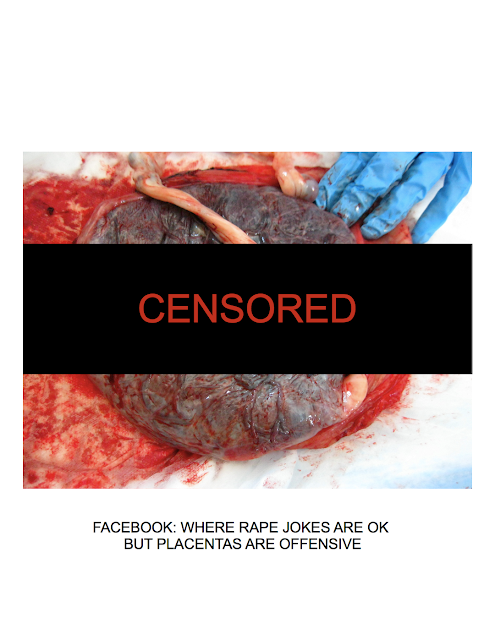 I also made this: 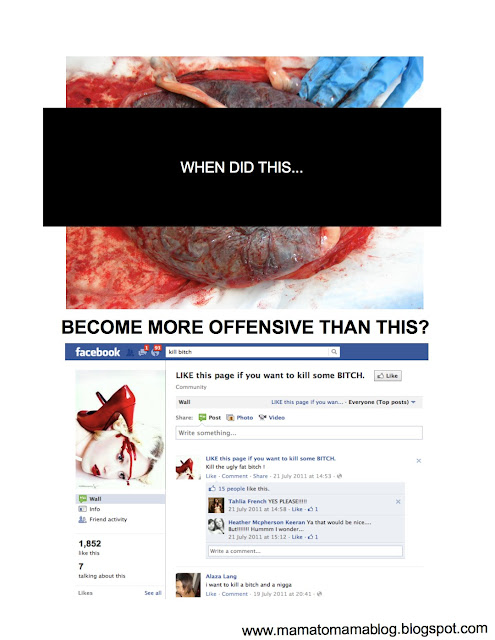 Which was based on the following, in which I used stills from YouTube birth videos that were deemed 'age restricted based on community guidelines' (a nice way of saying: people under eighteen would surely be warped forever by seeing this). Because it turns out Facebook doesn't have a monopoly on getting squeamish about birth but not about violence against women. 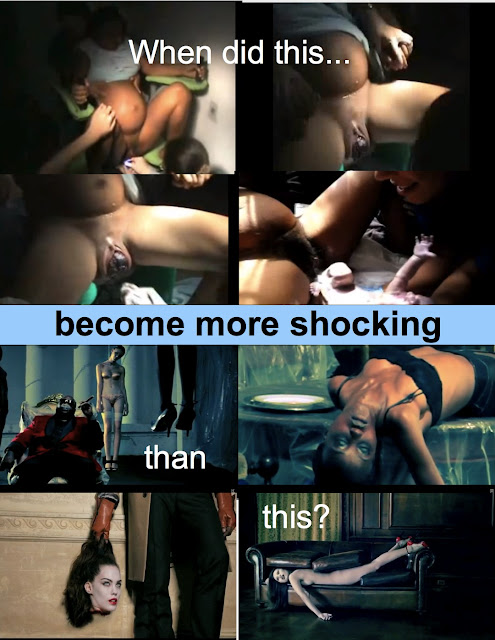 The pictures on top are from a beautiful video called ISEA, showing the birth of a healthy baby with very little medical intervention; the images on the bottom are from a truly disturbing music video, Monster, featuring Kanye West, Rick Ross, Nicki Minaj, and... new papa Jay-Z. The video caused controversy when it came out. After some public pressure, MTV refused to play it. YouTube, however, has several copies available for viewing. To anyone. No age restrictions. No community guidelines.


An unfortunate byproduct of the policy of marking birth videos as 'age restricted' is that all of YouTube's them have been lumped in with some truly offensive content. Age restrictions are there for a reason (usually), so the 'suggested videos' on the sidebar—since you, pregnant mom, are the kind of person who, nudge nudge, wink wink, is looking for racy content!—are violent and pornographic. 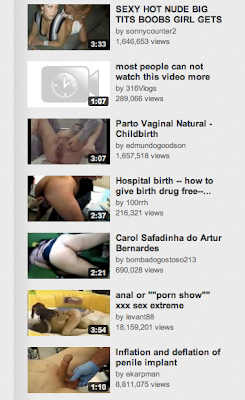 This further stigmatizes birth videos, making it uncomfortable to watch them (and believe me: if you're pregnant, you need to!). The whole experience just feels seedy. Only five out of fifteen of these recommended videos (below, a screenshot of what you see after watching 'Bastian's Birth - Part 7') are actually of births. The algorithm knows nothing about the distinction between childbirth and rape. How are you even supposed to find the birth in all this mess? 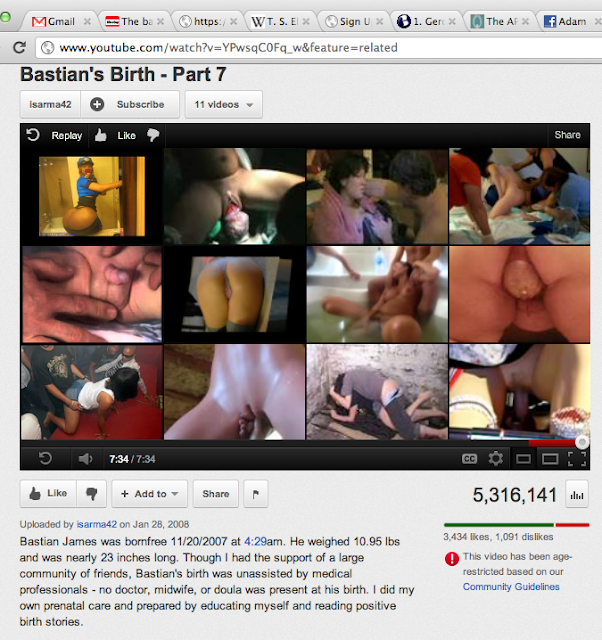 The message is this: that birth and breastfeeding are icky; that women are ridiculous for wanting to talk and learn about these basic facts of life, which would be better left taboo since, as one commentator put it, "Last I heard, it was facebook, not breastbook." That violence against women is sexy, funny, or both. That women should be looked at, manipulated, threatened and attacked, but not active, live, loving, nurturing, fucking amazing powerful beings.

In a recent statement, Jay-Z and Beyoncé said that their daughter's birth was, "emotional and extremely peaceful... the best experience of both of our lives." Maybe this experience will give Jay-Z some pause to think, and stop rapping beside women lying dead on the sofa. 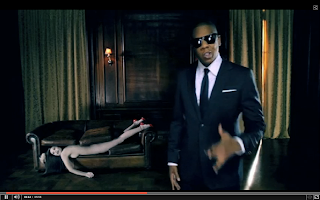 Then again, maybe it won't.
Posted by Svea Boyda-Vikander